It’s the deal that may have achieved a first in the debate about the future of Newcastle’s city centre: unity agreement.

The NSW government on Tuesday announced it had purchased The Store, paving the way for a revamp of plans for the Wickham transport interchange project.

The Hunter Street property backs onto the interchange, providing more room for buses and taxis, as well as car parking, which is missing altogether from the project’s current plans.

With a building height limit of 90-metres, or about 30 storeys, The Store also one of the city’s most strategic sites and it’s sale opens new urban renewal possibilities for the city’s West End.

News of the sale united key stakeholders in agreement.

Hunter chair of the Property Council of Australia, Edward Crawford, said The Store site could support a mix of commercial and residential uses.

“The sky’s the limit really,” he said. “It’s a great opportunity to think very laterally and come up with a great outcome.”

Transport hub gets room to expand

NEWCASTLE’S west end could be redeveloped and emerge as the city’s new commercial centre far sooner than anticipated, following the state government’s purchase of The Store next to the site of its Wickham transport interchange.

Urban renewal of the precinct was expected to be years away while the city’s rail corridor and east end were transformed first ‘‘but now this provides an opportunity to bring it forward’’, UrbanGrowth NSW Newcastle program director Michael Cassel said.

The state government announced the deal on Tuesday and said it would consider all options for the huge property, which crucially provides more land for the adjacent interchange that had been criticised for lacking adequate space for buses, taxis and cars. But with a building height limit of 90 metres, or about 30 storeys, it is also one of the city’s most strategic sites.

Planning Minister Rob Stokes said: ‘‘The NSW government has taken this important step to ensure this city has even more options for rejuvenation as new and accessible transport is delivered.”

The purchase, from the administrators of former Newcastle Jets owner Con Constantine’s company Almona, is due to settle in about six weeks.

Planners have already said it was unlikely to result in a major overhaul of the interchange design that would spell further delays and a possible budget blow out for the $460 million project.

Mr Cassel said ‘‘there’s no discussion at this point’’ about changing the alignment of the light rail, leaving the construction of platforms near the heavy rail straightforward.

‘‘It will be more about saying – OK we own this entire site now, what can we do to enhance the interchange,’’ he said. ‘‘In my mind it’s more about providing a customer experience, some retail, some more commercial activities.’’

A master plan for the government’s Wickham holdings will now be drawn up. The community would be consulted and a decision would need to be made as to whether to deliberately hold off on redeveloping The Store until after the east end redevelopment with the GPT Group is done and changes are made to the heavy rail corridor.

But it could all be done ‘‘running in parallel’’, Mr Cassel said.

Laing O’Rourke was awarded a $73 million design and build contract for the interchange last year, but so far only early works to prepare the site have been done.

Transport for NSW said major construction for the new interchange was expected to start by the end of the year and it would work with UrbanGrowth and other agencies to determine how to integrate the interchange with the new site.

News of the deal achieved what nothing else has in the long-running argument about the city centre’s future – uniting most stakeholders in positive agreement.

Property Council NSW regional director Andrew Fletcher said the purchase was a ‘‘game changer’’ for the west end that also ‘‘frees the shackles and allows the government to deliver on the promise of a truly world-class transport interchange for Newcastle’’.

The Property Council’s Hunter chair, Edward Crawford, added: ‘‘the sky’s the limit really. It’s a great opportunity to think very laterally and come up with a great outcome.” The Hunter Business Chamber said it would open up opportunities in the area and demonstrated the government’s commitment to the city.

Urban Development Institute of Australia Hunter chapter manager Elizabeth York said consideration should be given ‘‘to provision of a civic space associated with the interchange”, in light of long-standing plans for Newcastle West to be the city’s future central business district. Newcastle lord mayor Nuatali Nelmes said the purchase ‘‘just makes sense’’ and provided for a re-think of the interchange.

‘‘As the city’s main transport hub, the interchange must be an integrated, multi-modal site for commuters with capacity to handle large volumes of commuters travelling on rail, light rail, cars, buses, bikes and on foot,’’ she said.

Newcastle MP Tim Crakanthorp said it was an obvious solution, and one he had urged the government to pursue. ‘‘I am glad that the government has listened, they may now heed some other suggestions, such as where to run the light rail,’’ he said.

Former Hunter Development Corporation chairman Paul Broad, who resigned last month and publicly called on the government to buy The Store and keep the rail corridor as public space, congratulated the government. ‘‘The next generation will look back and thank us all for doing this properly and maintaining public space in the corridor.’’

Save Our Rail could not be reached for comment.

Interested in joining our team? Why not apply today?

Looking to study a B.Com at University of Newcastle in 2016? 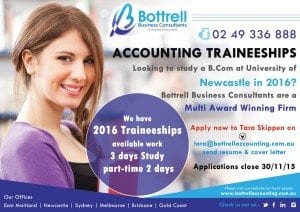 Our group of businesses & links include the following companies (& our websites);-